Shaastra is the annual technical festival of IIT Madras. It is one of the largest and finest technical platforms for the students for great innovations and new ideas. It was started in 1996 and the custom follows up till today. This was the 22ndedition of the festival with the theme being Shaastra 3018 and was held for a span of four days from 4thJanuary to 7thJanuary 2018 with a footfall of over 40,000across the globe. The festival was loaded with inspiring and fun Events and Competitions, Workshops, Lecture series, Proshows and more. Shaastra is completely organized and managed by a non-profit student body and is the first ever festival to be ISO 9001:2008 certified in the world.However, the team of Shaastra is divided into several departments like Promotions and Events Departments, Publicity and Finance Departments, Guest Lecture Department, the Proshow Department, Competitions Departments and more; headed by the overall coordinators. The basic motive of the festival is to achieve the perception to be at the borderland of the emerging technologies and to spread new and raw ideas of the youth amongst everyone. However, any festival is impossible without the chief supporters or the sponsors; few of the sponsors and partners of Shaastra 2018 wereVirtusa(Associate Title Sponsor),The Hindu, Tata Consultancy Services, Mahindra Rise, Prime Trip (Official Travel Partner), Ostron, Cognizant, Airbus, EAI, AWorkshop, Vmware,  IWMA, Polaris, Eaton, Carbon Zero Challenge, Latent View, Bubbles, Mouser Electronics, Gulzar Sethi, Juspay University, Rolls-Royce, American Express, 4iiteens, Digital India, Toppr, The Incubation Cell, Boeing and more. 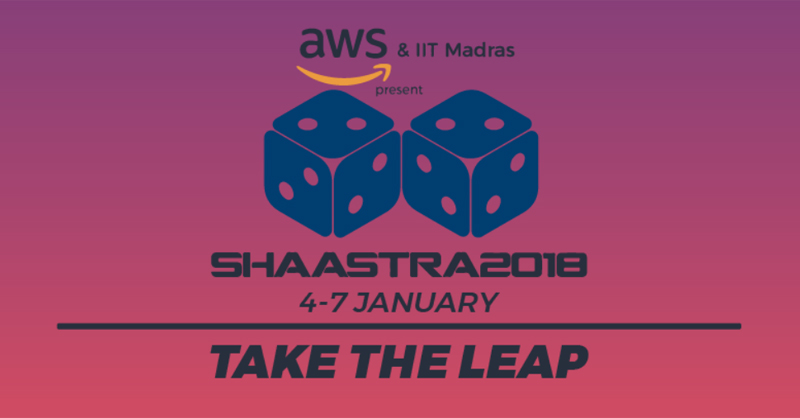 Shaastra 3018- The theme of Shaastra for this year was ‘Shaastra 3018’, with that Shaastra aimed to start out getting ready currently for a higher future, and conjointly take a glance at what technologies can we tend to see within thefuture.The future never goes as planned. It keeps throwing challenges as it comes with its own darkness. All that matters is however we tend to commit to kick off of it; however we tend to commit to build the long run of our own feeling.Shaastra celebrates Future and its infinite potentialities with its theme this year. With the GreenEnergy Summit, the Carbon Zero Challenge, the AI workshop and a great deal a lot of events, Shaastra is functioning towards a higher and a brighter future.

What’s on Your Hands!- “Posts on FB touching garbage, mobile and proxy;

Soap in mess good smelling and waxy
Bit weird and different what do we seek?
Vexed and slightly confused, you may beseech

Fret not, worry not; it’s all for a cause,
A life-saver one, indeed worthy of applause.”

Yes! It was a social campaign of the things we do on the internet without think and pass and share every usual; unusual stuff which shouldn’t be done. 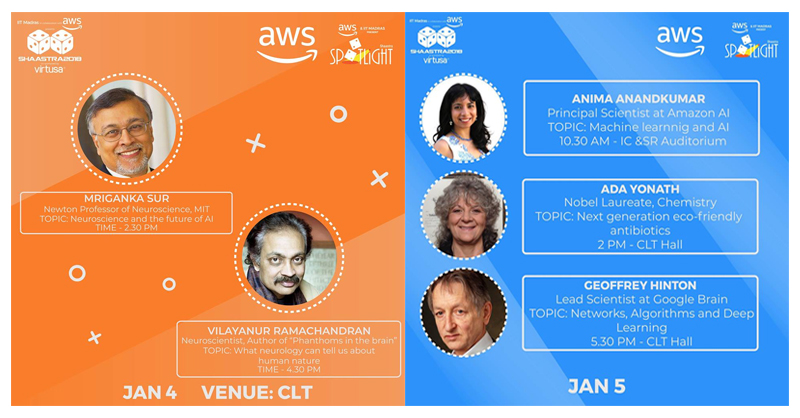 The four days extravaganza festival began with the commencement of various fun events and competitions headed under the categories namely; the Workshops, Coding, Quizzing, Events, Spotlight Lecture Series, Industrial Lecture Series, Proshows and more. The Event Caption being The Spirit of Engineering and the Theme of the Events being Take the Leap. However, the new additions that Shaastra 2018 was the Spark Junior Conference; whichwas the flagship event of Shaastra for school students who saw the addition of a national level conference along with the Spark Junior Quiz. This gave a national level platform to school students for presenting their innovative ideas; and the Green Energy Summit; with the tagline ‘Greenergize’, the summit for this year aimed to develop and provide renewable energy to rural areas of India. More than 100 events were held in the festival which concentrated on technology (and its promotion). However, few of the highlights of the events held in Shaastra 2018 were events like Aerofest, B-events, Coding events, Design & Build, Elecfest, Involve & Quizzing, Research events,BOEING National Aeromodelling Competition,Moot Courtand more; while in the Workshops section were the Amazon Artificial Intelligence Workshop,Raspberry-Pi for IoT, Ethical Hacking, Finance (360)Workshop, CodingWorkshop, Graphic designWorkshop, ElectricalWorkshop, MechanicalWorkshop, RoboticsWorkshop, SoftwareWorkshop, Structural StabilityWorkshopand many others.

The chilly cold weather of the New Year brought us to the first day of Shaastra i.e. 4thJanuary 2018. The first day was the Shell Day of the festival with great events, competitions, lecture series and more. Few highlights of the day were events (and the Prelims of few of the events) like Hovercraft Racing, Agrineers, the Green Energy Summit, Research and Innovation Expo, Reverse Coding, Jarvis, Puzzle Champ, Startup Wars, Junkyard Wars, Spark On and SOPC.In the Workshop secrtion were the Python for Ic Engine Workshop, Octave Workshop, Fusion Workshop, Aworkshop Drone Deivery Workshop, Face Detection & Tracking Workshop, IBM Build Your Bot Workshop, Web Development Workshop and the Salesforce Workshop.One of the major elements of the day was the Industrial Lecture Serieswhich included the lectures of Honeywell Throughbit and Eaton. However, the day was incomplete without the Shaastra Spotlight Lecture Series which included two great and inspiring personalities and they were Dr. Mriganka Surwho is the Newton Professor of Neuroscience at MIT and the Director of the Simons Centre for the Social Brain and will be talking to us about ‘Neuroscience and the future of AI’ and Dr. Vilayanur Ramachandranwho is a pioneer in the field of neuroscience. He is the author of the popular book ‘Phantoms in the limb’ and is named in TIME magazine’s 100 most influential people in the world. He talked about ‘What neurology can tell us about human nature’; and therefore the day ended on an inspiring note. 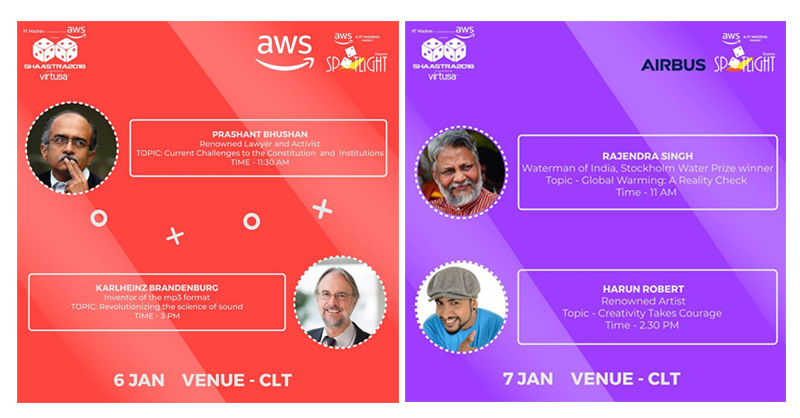 The second day of Shaastra 2018 was no less as it included events like theBrainsqueeze andSpark onand Workshops including the Fusion Workshop and the AWS Drone Delivery Workshop.Shaastra Spotlight-018 had three amazing lectures in store for everyone on day 2 i.e. 5thJanuary 2018 and they were the lectures with Dr. Anima Anandkumarwho is Bren professor at Caltech CMS and the brains behind the astonishing Artificial Intelligence tools offered by Amazon Web Services; Dr. Ada Yonathwho won the Nobel Prize in Chemistry (2009) and is known across the world for her work on the structure and function of the ribosome and Dr. Geoffrey Hintonwho is a world-renowned computer scientist and cognitive psychologist. He is a pioneer in the field of deep learning and is noted for his crucial work on artificial neural networks. The major highlight of the day was the Proshow- Envisage which is India’s first completely student-run techno-entertainment show organized and performed by the students of IIT Chennai. It was a grand technological marvel which mesmerized the audience with the enchanting performance.

The third day of Shaastra 2018 had some amazing activities for everyone in stock which included events like Hovercraft Racing, Jarvis, Puzzle champandAgrineers.In the Workshops section was the Face Detection & Tracking Workshop andIBM Build your Bot Workshop. The Spotlight Lecture Series included the lectures by Prashant Bhushanwho is a renowned lawyer and Social activist; he shared his vieWorkshop on ‘Current challenges to the constitution and institutions’; the second talk was by Dr. Karlheinz Brandenburgwho is the Inventor of the MP3 format who shall be talkied on ‘Revolutionising the science of sound’. The sparkling highlight of the day was the Proshow- the biggest New Year party which was the FREE EDM Night headlined by Mariana Bowho is ranked 84 in the top 100 DJ mag of 2017. The Opening Act of the night was by Broken Symmetry. the audience groove and dance on the electric beats of these phenomenal artists and the day ended on an exuberant note. 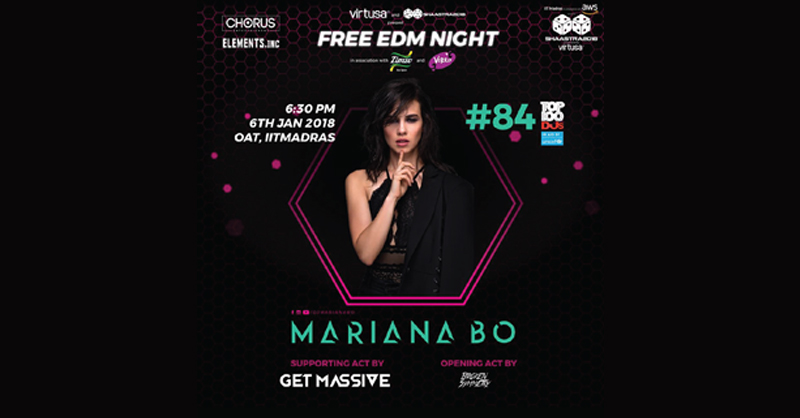 The last day of Shaastra 2018 surely had to be a memorable one and yes! It was. With events like the Startup wars and the Junkyard warsand the awe-inspiring finals of various events and competitions and workshops like the Python for IC Engine Workshop, Octave Workshop,Web Development Workshop and the Salesforce Workshop.The two awesome lectures in Shaastra Spotlight were by Dr Rajendra Singh, popularly known as the ‘Waterman of India’, who is an eminent environmental activist, water conservationist, and recipient of the prestigious Stockholm Water Prize. The second lecture was with Harun Robert, on the topic ‘Creativity Takes Courage’;Rob is an arts and crafts wizard whose wand wields a world of vibrant colors. Through his famous DIY show ‘M.A.D’ he became an extremely popular kid’s icon in no time.The last Proshow of the festival was theTech Magic Showby master illusionist Suhani Shahwho is one of ​India’s Best Tech Magician. Her act was brimmed with illusions involving technologywhich amazed the audience as she deceived everyone’s mind with her tricks. The evening was a blend of entertainment through grand illusions, mentalism acts, levitations, visual effects, blindfold presentations, situational comedy and audience participation and henceforth, the festival ended truly on a magical note.

The festival ended on a comprehending note, with great achievements and new heights. Shaastra 2018 gave the audience, the inspiration to grow and to never stop creating anything new for the development of one own self, technology and the society as well. The hard work and the dedication of everyone came out with flying colors as the festival went off smoothly and turned out to be a success; with so much to learn, gain, grow and innovate for the students; and excitement and high hopes for more for the next year, Shaastra 2018 IIT Chennai signed off.