The Indian Armed Forces are managed by the Ministry of Defence. There are three major divisions to our armed forces which are Army, Navy and the Air Force. These three fields have seen gallantry and patriotism by personnel which remains unmatched. If you wish to join these elite forces to contribute to the service of the country, be prepared for an exciting career which brings new surprises and challenges every day. 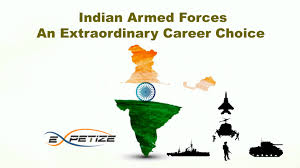 If you wish to join the Indian Army, then you can directly apply to NDA after Std. 12th. After basic training of three years, candidates can pick their stream which could be any of the three armed forces. If you have done your graduation then you can apply through the Central Defence Services Examination (CDSE). For potential candidates who have graduated in technical fields; their application can be done through Technical Graduate Course (TGC), SSC and University Entry Scheme (UES).

For people who wish to build a career in the Indian Navy, an ocean of possibilities awaits for them. The Navy secures our maritime borders and is also involved in different missions across the globe. There are many ways to get into the Indian Navy. Candidates from NDA can apply directly. Candidates can also apply through CDSE, Logistics Cadre and Naval Armament Inspection Centre (NAIC). The Indian Navy is also open to women candidates. In fact, the percentage of women applying for the Indian Navy has seen an increase.

The Indian Air Force is responsible for securing the air space over our country. There are three main branches of the Air Force. The Flying Branch, the Technical Branch and the Ground Duty Branch. The Flying Branch can be joined after passing out from the NDA or through CDSE. The Technical Branch is also open for candidates with B. Tech or B.E degrees. The Ground Department covers a range of activities which include accounting, meteorology and logistics.

The Indian Armed Forces are truly inspiring spheres which are served by both men and women whose sole agenda is to protect the country and uphold its integrity no matter the cost.