Techniche is the annual Techno-Management festival of Indian Institute of Technology (IIT) Guwahati. It started in 1999 with the motive of promoting technology and it was the 20thedition of the festival this year and was held for an epoch of three nights and four days i.e. from 31stAugust to 3rdSeptember 2017. It is one of the biggest techno-management festivals amongst the IIT Colleges with great footfall and many participating colleges. The festival was loaded with a variety of events like competitions, exhibitions, workshops, lecture, professional shows, tech-competitions and much more.

The team of Techniche consisted of student volunteers who work to promote technology; and however the team of Techniche comprises of the students under their respective heads who manage various departments like Marketing, Media & Publicity, Competitions, Finance & Accounts, Hospitality, Food & Beverages, Lectures, Exhibitions, Robotics, Industrial Conclave and Funniche. Techniche 2017 worked for a social cause of “Organ donation – Live Life, Give Life”as well, to save the lives of people and to contribute their share for the betterment of the society.

A very few college festivals exist which work for a social cause, Techniche 2017 IIT Guwahati was one of those. The social cause of Techniche this year was the Organ donation Campaign – Live Life, Give Life. It was a large initiative of its kind in order to warfare against the lost lives of the people due to the organ failure. It was a step taken to encourage people to #DonateOrgan in order to prevent people from dying due to their deficiency. Techniche IIT Guwahati organized the 9th edition of Guwahati Half Marathon on August 27 from the Bhogeswari Phukanani Indoor Stadium near GNRC Hospital, Dispur. This edition carried the message of Organ Donation – Live Life, Give Life. With the support of Facebook all the youthful souls out there were inspired to be a part of this noble cause and contribute their share for the betterment of the people and for a better future of the society.

The Campaign proved out to be a success, as people in large numbers gathered together for the noble cause of spreading awareness and the participation in thousands from all parts of North-East was witnessed. Their effort will certainly help and serve people in the long-run. Due to this campaign, a feeling of humanity, peace and love was spread amongst everyone as they did their part well in order to help and save the mankind.

A Blood Donation Camp was also held on all the three days of the festival. Everyone was allowed to donate blood in the camps and refreshments were also given to the respective donors. It was an inspirational step, taken by the students of IIT Guwahati to spread the word of mankind and humanity amongst everyone for the betterment of the society and the camp proved out to be successful as many students and other people donated their blood. 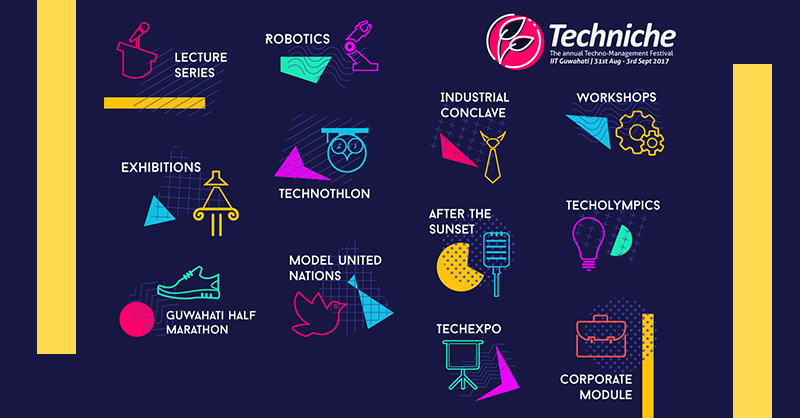 Techniche-2017, one of the biggest techno-management festivals amongst the IIT Colleges in the North-East was brimmed with breath-taking events, competitions and performances with great footfall and many participating colleges nationwide. The events which were held were categorized under few headings and they were Funniche, Tech-Expo, Robotics, Industrial Conclave, Workshops, Techolympics, Corporate, Lecture Series, Nites, Exhibitions, MUN and Technothlon. However, the few highlights of the festival which were held on the three days were The Blood Donation Camp, Bounce and Trounce, various Exhibitions and what not!

Techniche 2017 was declared open on 31stAugust 2017 with the inaugural ceremony proceeded by the keynote by Brooks Moore(the host of How it’s Made- Discovery Channel). His inspirational words ignited the fire of learning amongst the students. The first day was incomplete without the special element and that was the performance by Dhruv Visvanath (a multi instrumentalist, composer, singer, songwriter, and producer), who is the only Indian in the list of “30 Great Guitarists Under 30″. And therefore, the day ended on a mild note.

On Friday, 1st September 2017, Techniche began with the inaugural ceremonies of various events like TechExpo, Technotlon and MUN. In the Lecture Series, a keynote was given by Dr. Nadrian Seeman, a famous American chemist and Crystallographer and well known as Father of DNA Nanotechnology. The event was also followed by another keynote by Dr. Subramanian Swamy, Member of the Rajya Sabha, Harvard Associate Professor and a famous Economist. The lectures witnessed a huge crowd with people from various parts of the North-East and other parts of the country as well. The Industrial Conclave included the sessions with Mr. Vinay Singhal (the CEO and Co-founder of Wittyfeed), Mr. Sreejit Roy (Vice President of IBM India) and Mr. Farhat Jamal (VP Operations, Taj Hotels). The Workshop section included the workshops on Rasberry Pi, Mobile Robotics, Andro Engine, Web Development, Ethical Hacking, Social Media Marketing and Sixth Sense. The Exhibitions included the Exhibition of the Heroic Robot of Star-Wars ‘R2-D2’, the Heart of Disney ‘WALL-E’and INDRO-India’s tallest humanoid. The crowd also witnessed the formal landing of an Air Force Chopper which marked the inception of the Air Force Exhibition.  Events like Escalade in the Robotics section, the Brainchild-The B-Plan Competitionin the Corporate section and Phyesta and Cryptophobia in the Techolympics section were also a major highlights of the day. In the Funniche section several fun events like 1UP Virtual Reality Game and Zorbing were held. As a part of ‘After the Sunset’ event, the night concluded with a hilarious comedy show by Mr. Sahil Shah, co founder of East India Comedy. Sahil is a famous standup comedian and was welcomed in a very cheerful way by an amazing crowd. 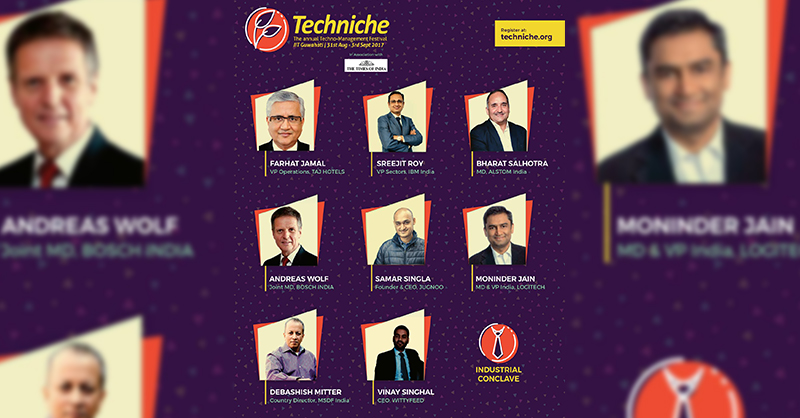 The third day of Techniche 2017 was no less, as the day began with the lecture series which included the keynotes by Mike Morasky (VFX Artist, CS GO) and Shri Suresh Prabhu(Honorable Railway Minister). In the Industrial Conclave, sessions with Mr. Debashish Mitter (Country Director at MSDF), Mr. Bharat Salhotra (Managing Director at Alstom) and Mr. Moninder Jain(Managing Director at Logitech) were held. The Workshop section included the workshops on Photography, Machine Learning, Bluetooth Robotics, Android Beginners, Bridge Design, Automobile & IC Engine, Cloud Computing, Internet of Things and the “Brain Controlled Robotics Workshop”which brought for us the Puzzle Box, from the US, who showed us how EMG waves given off by a brain can be used to control robotics. Events like Phototronin the Robotics section, Quantum Escape in the Technothlon section, Portfolio Pitch and Startup Showcasein the Corporate section and Build to Last in the Techolympics section were the other highlights of the day. Various fun events in the Funniche section like Chess and Sumo Wrestling were also held. The second ProNite of Techniche 2017 was an enchanting performance by a popping dance group from South Korea, the Animation Crew. This stunning fusion of dance and technology made the auditorium of IIT Guwahati reverberate by the noises of the audience and the day ended on a high note.

The last day of Techniche 2017, came up with more of surprises and fun competitions to look forward to. In the Lecture Series, the keynote was given by Dr. Thomas Barclay(Director, Kepler/k2).  In the Industrial Conclave, sessions with Dr. Andreas Wolf (Joint MD, Bosch), Mr. Samar Singla (CEO & Co-founder at Jugnoo) and the Networking Lunchwere held. Events likeNautilus in the Robotics section,Contador de Electronica, A Little Bid and the Prize Distribution the Technothlon section, Sales Olympics and Case Study Competition in the Corporate section and Emulate and Codescape in the Techolympics section were few of the major highlights of the day.In the Funniche section several fun events like Laser TagandLan Gamingwere held. The wonderful performance by Lucid Recess (TheAlternative Metal and Progressive Rock Band) was undoubtedly the cherry on the top of the festival’s evening as their performance was certainly an outstanding one.

Well, well!! How could the Techno-Management festival Techniche 2017 IIT Guwahati end without the scintillating performance of the Naalayak Band; theawesomeness quotient that they added to Techniche was amazing as they lighted up the atmosphere with their heart throbbing performance so much that the audience couldn’t stop grooving to the beats and their concert didn’t fail to give the fest the perfect ending and this dropped the curtains of Techniche 2018.

The festival ended on an exuberant note, with great achievements and new heights, leaving behind golden memories for everyone to grow, gain and learn. The efforts and devotion of everyone turned out with flying colors as the festival went smoothly and came out to be successful. The technical ride of the festival came to an abeyance for everyone until Techniche 2018.