SAARANG 18- the annual cultural fest of IIT MADRAS. It is the second oldest college festival in India which was started in 1974 and therefore the tradition follows up until today and is held generally within the second week, in the month of JANUARY once a year. It was the 44thedition of this festival this year with a footstep of over 65,000+ with over 90+ events and many participating colleges. It was incommand for a span of five days from 10th-14th January 2018 across the country.

The competition was brimmed with fun and interesting Events and Competitions, Workshops, Proshows, Quizzes, on-line Activities and far a lot of. The team of Saarang 18 is a Student-run non-profit organizationwhich consists of student volunteers WHO work and perform so as to push ability, music information and imagination. For the sleek functioning and success of the festival, the team was divided into many departments like sponsorship & PR, Events, Web & mobile operations, professional shows, marketing and sales, publicity & branding, hospitality, design & media, finance, facilities, safety & security and QMS headed by the secretary of cultural affairs (arts). 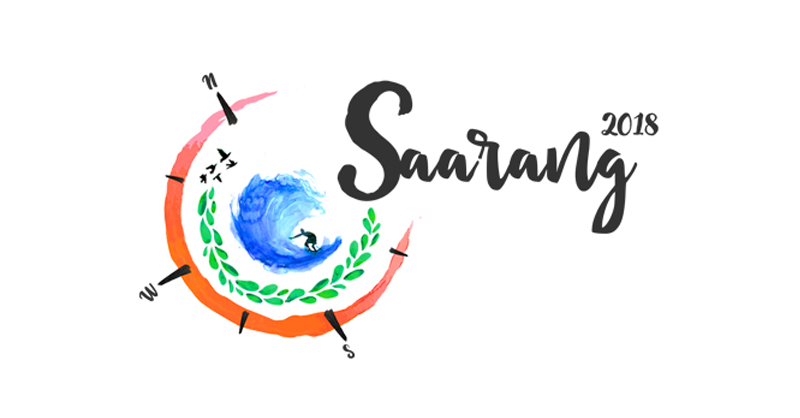 A really few college fests work for a social cause, so did Saarang-018 IIT Madras. The social cause this year of Saarang 18 was Boondh. It absolutely was an enormous initiative of its own so as to ensure everyone’s access to safe drinking water. However, any festival is impossible without the chief supporters i.e. the sponsors and therefore the sponsors and partners of Saarang 2018 were MRF(Title Sponsor), One Plus(Platinum Sponsor), Infoview(Platinum Sponsor), (Presented By) The Times Of India, Pepsi(Beverage Sponsor), Maruti Suzuki Colors Of Youth(Exclusive EDM Night Sponsor), ROBOSAPIENS(Workshop Sponsor), Zee Café(Youth Sponsor), BRITISH COUNCIL(Classical Night Cultural Sponsor). 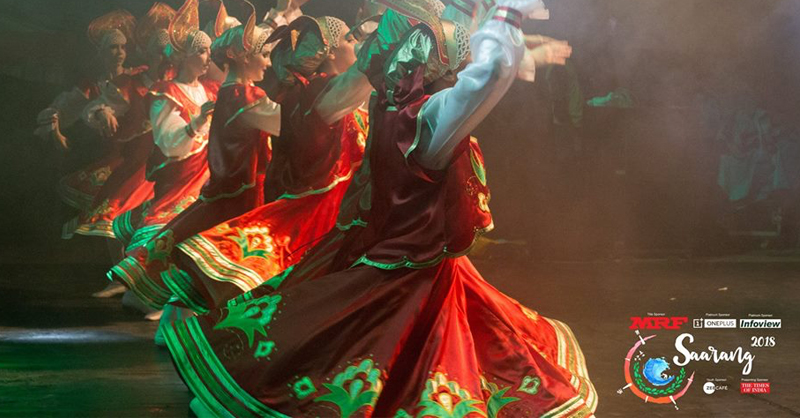 Saarang 2018 IIT Madras is amongst those of the very few colleges which work for a social cause every year. However, the social cause of the fest this year was Boondh with a prolific actor and an erudite mind who is the co-owner of Chennaiyin FC; Abhishek Bachchan.It was a great initiative of its kind in order to ensure everyone’s access to safe drinking water. Safe water is, and has always been a matter of concern and debate amongst everyone. It is an initiative which was started two years back. Boondhstrives to create a bearing at the small level. Be it the installation of water pumps, awareness making programs, water vows. Boondhis driven by the insurmountable belief in making a modification and alternating the course of things. In essence, a social campaign for a positive turmoil. The social campaign of Boondh was organized on the 14thof January 2018 as the Boondh Run. The motive of this campaign was to promote this environmental issue as grand as possible and Saarang-018 was successful in doing so.

Saarang 18 was declared open with the commenecement of various Events and Competitions.The events were loaded with performances from every field and dimension as more 90+ events were held. The events were divided into several genres namely,  Thespian, Quiz, Lifestyle, Choreo, Oratory, Word Games, Comedy, Fine Arts, Adrenaline Zone, Design, Media, Food Fest, Classical Arts, Music, Writing, Spotlight, Anime Fest, Roadshows, Informals, Gaming, Workshops,  Proshows and much more, which were held in the college campus itself. The 120 hours festival was a complete package with many surprises and celebrity aplenty. Few of the sparkling highlights of the festival were few of the activities in the Word Gamessection like Scrabble, Spell B, What’s the Good Word?, Crossie and Potpurri;Whose line is it anyway!? (in the Comedy section), activities like Cricket Simulator, Trampoline, Sumo Wrestling, Meltdown, Slippery Football and Silent Disco amongst the Adrenaline Zone;The Bike Stunt Show amongst the Roadshows; Zumba Workshop(the Choreo section); Online Photography Contest; Online Script Writing (amongst the Thespian section), Online Design Contest; Bon Voyage, Short Film Making (SFM) in the Media section; Facebook Flash Fiction (in the Writing section); the DOTA 2 Tournament, the CS:GO Tournament and the

FIFA 18 Tournament in the Gaming section; Who’s my match? andSettlers of CatanTournamentin the Informals section and many others. 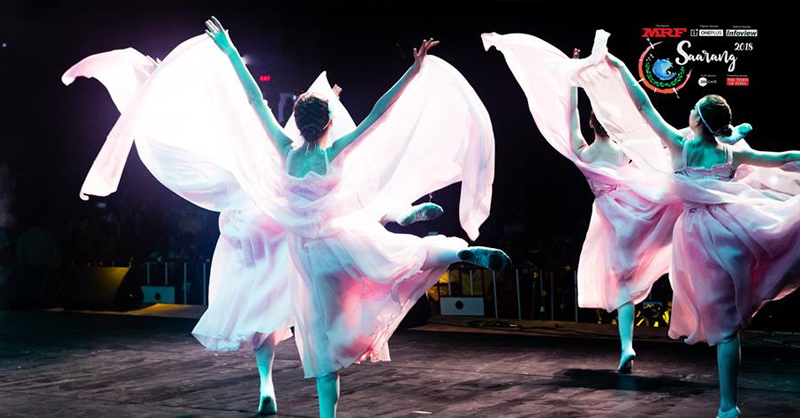 The Day one of Saarang 18 started with the commencement of various interesting events and competitions which inculcated zeal of imagination and creativity amongst the students. Few of the events which were held on the first day included, Dramaticsfrom the Thespian section; Buzzer Quiz, Battle Shots amongst the Informals section. All these amazing events gave a very warm welcome to Saarang-018 to be proceeded the next day. But, How could the day end without the Proshow i.e. the Classical Night with the performance of National award winning playback and Carnatic singer Unnikrishnanas the headlining act along with Mix the Cityby British council and Russian ballet. The classical night of Saarang 2018 was extravagant as ever as the day ended on an extremely soulful note. 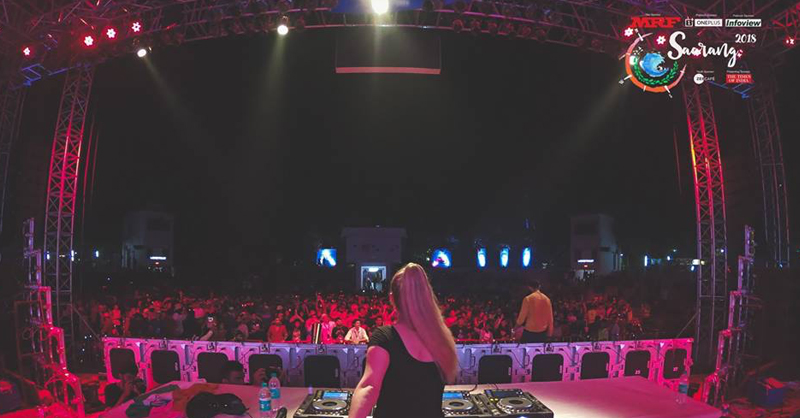 The chilly winter January morning brought us to the second day of Saarang 18 i.e. 11thJanuary 2018. The day held many surprises for everyone. Few of the events held on the day wereMiniature Golf, Daring Jenga, Car Jousting, Wanderlimbs, Volatile Volcano, Crab Soccer, Meme Fight!, Tokyo 2020, Hungry Hippos, Pac Man, Minute to Win It, Saarang Express, Destination,Face the Cookie, Flywheel Knockdown, Newspaper Dance, Belly Balloon Break, Can Jam, Never have I ever, Pack my Suitcase, Blindfold Limbo, Muggle Quidditch , Soccer Physics, Serendipity and3D Twister amongst the Informals section.Among the Quiz section were the Fandom quiz andTravel & Livin quiz, the Salsa workshop, Nrutyam, Workshops and Demonstrations of Mexican and Italian food with the amazing chef- Gautam Mehrishi in the Food Fest, Vox and the Battle of the bands in Powerchords, the Animation Workshop, Debate and Claytopia from the Fine arts section. The other major highlights of the day were; Standup Showdownwith the humorous standup comedian Vikash Paul, the Roadshow consisting of the Freestyle Football Performance by Masthan Khan, Saarang’s own lecture series- the Spotlight with Abeer Hoque, Shraddha Srinath and the Dhananjayans.The Saarang Choreo Night 2018was the much-awaited intercollegiate dance competition which was a dance face off in front of the world-famous judges and yes the day had to end on an enthusiastic and competitive note. 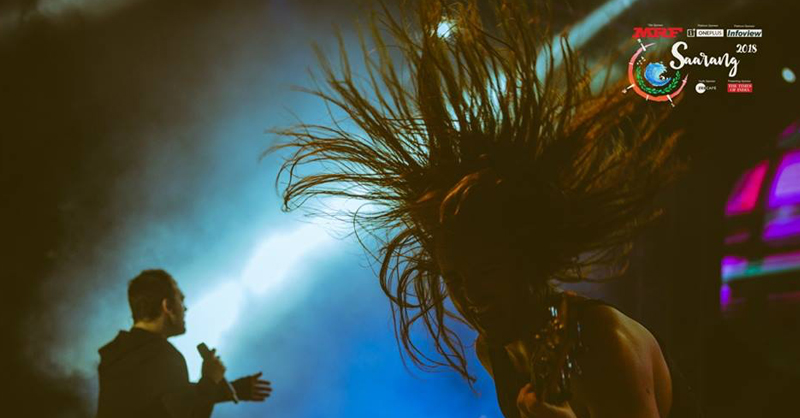 The third day of Saarang -18 i.e. 12thJanuary 2018 proceeded with more of surprises with events and competitions like Blind Volleyball and theTreasure Huntamongst the Informals section. Among the Thespian section were Monoacting and Vernacular Monoacting. The SpEnt Quiz, Streetsfrom the Choreo section,The Stress Interview and Just a Minute (JAM) in the Oratory section,Monochrome,Saarang Photo marathon, Workshops and Demonstrations of Sushi with Gautam Mehrishi in the Food Fest. Aaroh the Classical Art performance, Acapella, Alankar and Decibles which was the semi-professional band competition nationwide, Writing Avialand the Anime quizwere the few other events. However, the sparkling highlights of the day were, the Roadshow consisting of the Parkour Workshop by the Tamil Nadu Parkour Association, Hula Hoop Workshop and the Juggling Workshop with Gunjan Saraf. The Standup Showdown session full of laughter withNaveen Richardwho is a comedian, actor and writer and theSpotlight lecture series with the very famous Malika Dua. The electrifying performance by Aronchupa and Nina Suertein the EDM Night of Saarang 2018 jam-packed the audience with their galvanizing beats and the evening certainly ended on an exciting note.

The fourth day of Saarang -18 was no less as it included activities like the Performance Poetryin the Thespian section, The Lone Wolf Quiz; the African Dance Workshopand Freestyle Soloamongst the Choreo section. Other events included Supertagin the Adrenaline Zone, Elocutionin the Oratory section,Maschera and the Colourburst, Designathon, Chef Wars and War of Jaws

Anhad, Tarang– Inter-college Band Hunt, Acoustyx and Unplugged – Raw Music Faceoff, Beyblade Tournament, Anime Quizand Saarang’s Amazing Race & Last Man Standing amongst the Informals section. However, the dazzling highlights of the day were;Freestyle Football Workshop, Kalaripayattu with Rajesh Gurukkul,theSpotlight lecture series with Somdev Devvarman, Karthick Naren, Santosh Narayanan and Aahana Kumra.Panache– the Fashion Show was another major highlight of the day which was a platform for generation of avid and enthusiasticminds within the fashion field and glamour trade.  The Rock Show of Saarang 2018 was bigger and better than ever, where American metalcore band, Veil of Mayawithin the Open Air Theater took the stage for the first time in India, in conjunction with the up to date Carnatic rock music band Agam. 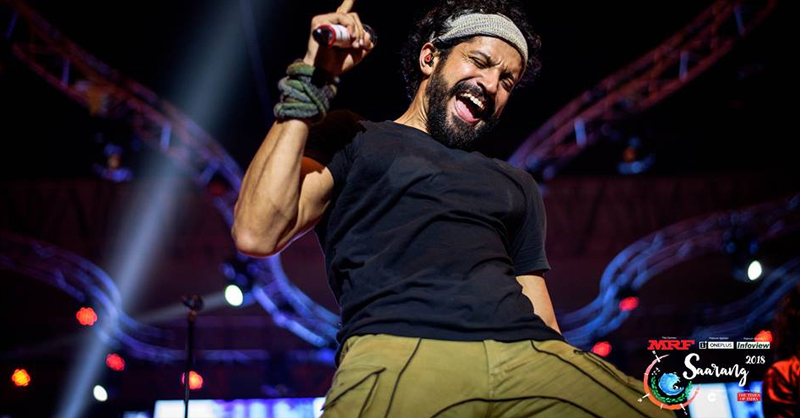 The last day of Saarang 18 was the most exciting amongst all the five days various events like Monoacting and Street Playin the Thespian section, India Quiz, Salsa Workshop and Just Duetin the Choreo section, Graffiti Workshop, Masterclass, Chef Wars, Dhrutam, Sonata In The Music Section, Onsite Creative Writing, Pokemon Contest, Cluedo, Spikeball In The Informals Section. The other highlights of the last day were Freestyle Footballperformance by Tejas R.,the Face of Saarangwhich was  the Talent hunt for the discovery of energetic and artistic personalities, a platform that welcomes one’s proficiency to bring out astounding performances on stage.TheSpotlight lecture series withMedha Patkar, Alicia Souza, Amal Neerad, Sagarika Ghose and Pushkar-Gayatri. The Popular Nightwas surely the most energetic night of Saarang as it witnessed the performances of Haricharan and Farhan Akhtarperforming with his band Farhan Live!Their performance certainly left the crowd dancing and grooving to their beats till the end.

On 14thJanuary Saarang -18 IIT Madras concluded with finished with superbperformances and achievements. The festivalleft behind sorcerous reminiscences for everybodyto recollect throughout their lives. However, the festival ended on an exuberant note with great victories and new heights and everyone enjoyed to the core.The hard work and dedication of all came out with success because the festival wentswimminglyand came out to be successful. With such a lot to find out, grow and gain for everybody, Saarang-018 IIT Madras bid au revoir till the succeeding year.